Bluetooth was actually invented as long ago as the late 80s, but it barely hit the shelves until 2001 according to Android Authority.

Bluetooth was used for two things in the early 2000s:

Bluetooth headsets were a bit of a rarity even throughout the early 2000s, but now, Bluetooth is absolutely ubiquitous and has been transformed by the advent and widespread use of Bluetooth headphones and earphones.

In 2016, Apple famously (and controversially) cut the 3.5mm wired headphone port from their iPhones.

In what became known as ‘forced Bluetooth’, many other phone manufacturers followed suit and cut the headphone jack from their phones, primarily to save space, but also to sell a suite of adapters as well as branded Bluetooth headphones.

In fact, if you own a modern smartphone, there’s a good chance your phone doesn’t have a 3.5mm jack.

Although many manufacturers have stayed true to the faultlessness of wired technology, the 3.5mm jack will slowly but surely become a tech dinosaur.

For many, the annoyance of losing the 3.5mm jack has been fairly easy to stomach. Bluetooth headphones are reliable, they sound decent and though often overpriced, there are plenty of cheaper models available.

So what’s the problem?

As new technology becomes widespread, the question ‘but is it safe?’ will grow in interest.

All throughout history, you can find numerous examples of technologies that people thought were safe at the time but actually turned out extremely bad for us.

In the 1900s, radioactive elements were sold as toys or good luck charms. People even thought they cured health ailments. X-rays, when discovered, were administered for fun – as a novelty – at fairgrounds or in public.

It wasn’t until 1910 that many of those who popularised X-ray technology started dying of cancer.

Today, there is a growing concern that Bluetooth headphones – and indeed many other wireless technologies – will fall into this same category.

The problem is, these technologies are not exactly uncommon or niche.

They’re the opposite with some 3.5 billion+ people in the world now owning a smartphone with some studies placing daily average usage at 2 hours or more.

The problem is, if there is any incline that Bluetooth headphones, phones or other wireless technologies are unsafe, then we’re exposing ourselves heavily to them on a daily basis.

The problem with wireless technologies such as phones and Bluetooth headphones is that they generate radiation via EMFs – electromagnetic fields.

All electronic devices generate some level of electromagnetic field. In the case of Bluetooth headphones, this is not the same type of ionising radiation as is generated by X-rays and other types of radiation such as gamma rays.

Yes, phones generate the same type of radiation as a microwave oven does, but obviously not at the same level of intensity, and the microwave spectrum is fairly large.

Instead, the radiation produced by phones falls into the category of non-ionising radiation.

Traditionally speaking, it was thought highly unlikely that non-ionising radiation could cause damage to our bodies and cells.

But today, a burgeoning body of scientific research is uncovering the numerous health consequences of this type of radiation, including the radiation emitted by Bluetooth headphones.

This is perhaps best summarised by the Bioinitiative Report first written in 2012 by 29 scientists in total. This team of scientists created the report after reviewing 1800 studies on EMF and various subjects related to wireless technology and radiation.

The report urges forth new protective measures to warn the public of the public health timebomb that we’re all likely sleeping on.

The WHO also officially classified phone radiation as a 2b carcinogen in 2018;

The Case of Bluetooth Headphones

Now we’ve established the clear risk of phone radiation, we must ask how Bluetooth headphones fit into all of this.

Bluetooth operates at 2.4gHz, which is actually closer to the microwaves emitted by a microwave oven than a phone.

Whilst Bluetooth was previously thought to be incapable of transferring enough energy to our cells to cause damage, the evidence around this began to change in 2011.

Plus, since then, Bluetooth technology has become much, much more powerful.

Bluetooth transmitters can be sorted into 3 categories:

Class 1 transmitters — transmit with the power of 100 mW (milliwatts)

Class 2 transmitters — transmit with the power of 2.5 mW

Class 3 transmitters — transmit with the power of 1 mW

Class 3 transmitters are the weakest here, Class 2 to the middle, but Class 1 transmitters pump out 100x more power than Class 1. This provides connectivity ranges of over 300 feet or so for some devices.

Since their second generation, all Apple Airpods have used Class 1 transmitters – the most powerful kind currently in use. Whether or not Bluetooth technology can become more powerful still or whether it’s hit its ceiling is unclear, but perhaps also irrelevant.

The Risk of Bluetooth Headphones

The risks of Bluetooth headphones are mainly associated with where we put them – directly into our ear canal.

The ear itself is made from some of the finest, most intricate physical structures in the entire body.

The anatomy of the ear is quite incredible, involving 3 tiny bones collectively called the ossicles. The ossicles include the malleus, the incus, and the stapes – the stapes is the smallest bone in the human body at just 3.5mm long.

These bones help transmit vibrations to the cochlea which transforms sound into something our brains can process and understand.

The first risk of Bluetooth headphones is their noise – but that we all probably already know about.

The second risk of Bluetooth headphones is that they pretty much beam radiation directly into our brains.

Professor of biochemistry Jerry Phillips at the University of Colorado told Business Insider;

“My concern for AirPods is that their placement in the ear canal exposes tissues in the head to relatively high levels of radio-frequency radiation.”

Whilst there are some structures between the ear and the brain – like the cochlea – the bone itself is very thin. It’s probably the most vulnerable part of our body as far as radiation is concerned. Clearly, intuition tells us that we should be very careful and wary of what we place in our ears.

Joel Moskowitz from Berkely in a live Q&A stated that;

“For some Bluetooth devices like Apple’s AirPods, the Specific Absorption Rate (SAR), a measure of the body’s maximum exposure to microwave radiation, exceeds that of many smart phones.”

“Moreover, the cumulative exposure to radiation from wireless headsets may be substantial since many users keep these devices on their head for hours at a time.”

This highlights a key point – Bluetooth headsets and headphones can be in our ears for maybe an entire day if we’re using them to take calls from in front of our computers, or are on the go. We are really maximising our risk of exposure to radiation in any form, at any level, when we use Bluetooth earphones such as Airpods.

To answer the question, are Bluetooth headphones safe? we can safely assume that some people use them for hours at a time, potentially more than their phones. And let’s not forget that our phones remain on us when we’re using our Bluetooth headphones, so although we’re not exactly doubling up, as we’re not taking calls on our phones, we’re still exposed to radiation through our pockets, etc.

The SAR Of Bluetooth Headphones

Phone radiation is regulated and limited to some degree using SAR measurements.

SAR is measured in watts/kg. The kg refers to human tissue. It measures how much energy every 1kg of human tissue absorbs.

To test SAR, independent laboratories measure the energy emitted by a phone as absorbed into different phantom (fake) body parts such as the head. 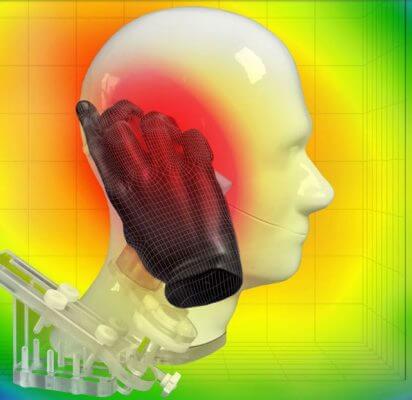 The SAR produced by most android phones and iPhones varies considerably. SAR is not an ideal or accurate measure, and is generally considered a poor or incomplete indication of radiation emission.

However, SAR is one of the few measures we have.

So, what is the SAR of Bluetooth headphones?

The SAR of Apple AirPods

That makes for a combined total of 1.082W/kg for both headphones.

Joel Moskowitz admits that there are only two small studies into the damaging effects of Bluetooth headphones and both look at hearing loss. But, given the evidence surrounding radio frequencies and microwaves emitted from mobile devices, the general consensus is that it’s highly likely that Bluetooth headphones pose many of the same risks as mobile phones.

What Are the Risks?

The potential risks of mobile phone and Bluetooth headphone radiation range from various types of head, neck and breast cancers to infertility.

These are the most widely researched consequences and have been extensively discussed by the Bioinitiative team of scientists, the EMF Scientist team of scientists and expert individuals in the field such as Joel Moskowitz.

The WHO themselves now classify RF radiation as a category 2b ‘possible carcinogen’. This shows how the risks of mobile phones are certainly not confined to the fringes of science anymore, but are becoming a mainstream narrative.

So what are the alternatives to potentially dangerous Bluetooth headphones?

The first and easiest way to reduce your exposure to Bluetooth headphones is to literally stop using them so much.

There may be times you leave your headphones in when you don’t need to, and though they might enter standby modes, it can still be hard to tell whether or not they’re on or off.

You might choose to listen to headphones more than to your PC/laptop/external speakers when you’re at home – switch back to using your speakers instead of your headphones.

Anything that involves using your Bluetooth headphones less will reduce your exposure – simple!

Wired headphones could be considered a ‘healthy’ alternative to Bluetooth headphones, but there are some caveats.

Namely, some speculate that radiation travels up the wire from your phone when you use wired headphones. This makes sense from a physics perspective as the wire will act as an antenna or aerial.

This is why you can get stronger signals when you plug your phone into headphones sometimes.

So, wired headphones are maybe not an ideal solution.

Airtube headphones such as the WaveWall Airtubes use an innovative air-filled capsule to stop phone radiation from passing all the way up the wire. 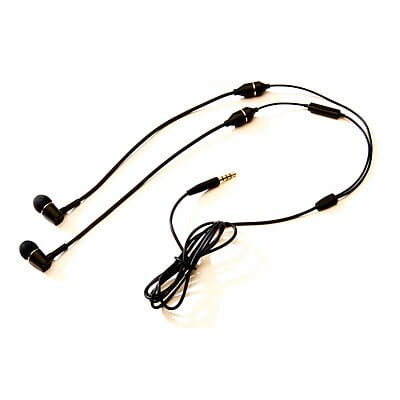 The air capsule, or tube, allows sound energy to pass through whilst cancelling or filtering out electric energy and radiation.

Once the sound passes through the tube, it’ll be picked up on the other side.

Airtube headphones are an excellent way to stop mobile phone radiation in its tracks, protecting you from radiation that travels up the headphone wire.

Bluetooth headphones are very common and many of us use them daily.

A range of scientific evidence suggests that we need to exercise caution when using Bluetooth headphones.

Limiting usage or looking for alternatives are the only solid options to help protect yourself against a wide range of potential health problems.

The reality is, the risks of EMF exposure will likely only get worse as time goes on – the time to take action is now