These days most people are glued to their phones and feel as though they can’t live without them. While technology and gadgets are useful and help improve your daily life, many are unaware of the health risks these gadgets present.

The natural world and your body produce electromagnetic fields, but they’re considered low in intensity. The much more intense electromagnetic fields are produced by technology, and some believe that long-term exposure can cause health risks. It’s tricky because you can’t hear or see them and may not think much about them as you go about your day.

Phones, microwaves, Wi-Fi routers, computers, and other appliances send out a stream of invisible energy waves that some experts are concerned about. The rate at which people use these types of devices is only increasing. Therefore, it’s essential to answer the questions, what is emf, or electric and magnetic fields, or radiation, and what does it mean for you?

What is EMF Radiation 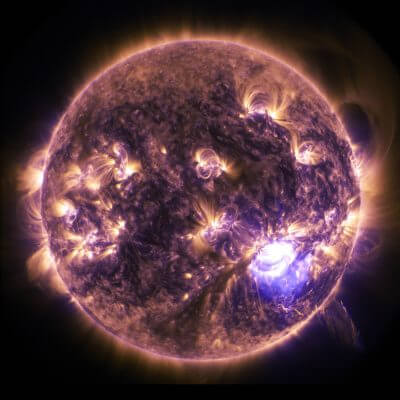 Although you may use your phone a lot, you may not understand the details of how electronics work. Every electronic device from your hairdryer to your phone emits forms of Electromagnetic Field radiation, also called EMFs. They use an electric current passing through a circuit to perform a function. These levels vary based on the purpose of the device.

Electromagnetic fields are considered “radiation”, a byproduct of energy transmission. The sun, for example, sends out waves that create EMFs naturally. From power lines to x-rays, it’s safe to say there’s a lot of electricity and EMFs created around the world. While most scientists would agree there’s not enough evidence to say it’s dangerous, some are concerned about long-term exposure. EMFs are measured in a unit called volts per meter (V/m). It’s safe to say, the higher the measurement, the stronger the EMF.

Think about how much of your waking hours you spend connected to technology and on your phone. It may be more than you think if you start to track it and are more aware of your habits. While watching television may be less of a priority for you, it’s likely you’re swapping out these EMFs and using other devices such as your phone or computer regularly.

It would be beneficial if you focused on doing what you can to protect yourself from EMF radiation to stay well. It’s not only about limiting your sun exposure and reducing your phone use but also committing to spending more time outdoors away from your devices and eating foods that are rich in antioxidants. Pay attention to how you’re spending your days and what you can do differently to alter your routine, so you’re living a healthy lifestyle and can keep yourself free from known dangers.

Generally speaking, there are two broad categories of electromagnetic frequencies on the spectrum: “Non-Ionizing Radiation” and “Ionizing Radiation.” Non-ionizing radiation is mild and thought to be harmless to people, such as getting an MRI or using your phone. On the other hand, ionizing radiation, or high-level radiation, is a form of ultraviolet rays from the sun. See examples below for further clarification.

Overall, there’s not enough solid research out there to prove that EMFs are harmful to human health. However, experts tend to have a range of thoughts around the topic and often disagree over its safety.

A growing number of scientists believe that exposure to non-ionizing radiation over extended periods, we’re talking years, may cause serious health issues, and current scientific studies are substantiating these concerns. Think about how often you use your phone and how frequently you carry it near your body. It makes sense that there is a concern among experts about this long-term exposure and use.

According to the World Health Organization’s International Agency for Research on Cancer (IARC), EMFs are “possibly carcinogenic to humans.” The IARC believes that some studies show a possible link between EMFs and cancer in people. Remember that while there’s a link, there’s not enough evidence to say it causes the cancer. They’re particularly concerned about phone usage and how many people are using them and keeping them close to their body. It’s the item people use most that give off EMFs. All would agree better research and more monitoring is needed.

Besides cancer, other studies go on to suggest that EMFs may cause various neurological and psychiatric problems in people, which impact sleep and mood. An overwhelming number of studies have been conducted on EMF radiation that shows there can be many risks to our health.

An organization called the International Commission on Non-Ionizing Radiation Protection (ICNIRP) maintains international guidelines for EMF exposure. The guidelines are based on the findings of many years of scientific research. Luckily, most electrical appliances that reputable brands sell can confirm that their products fall within the recommended guidelines for EMF levels. If your exposure to EMF falls below the levels outlined in the guidelines, you shouldn’t expect to experience any negative health effects.

Be glad to know you have the power and control to monitor EMF levels in and around your home. You can purchase an EMF meter online to check your devices.

Some scientists believe that continuous exposure to EMFs will affect your body’s nervous system function and can damage your cells. Unusual growths that emerge or cancer can be a symptom of extremely high EMF exposure. Here are the other symptoms to be on the lookout for:

You may notice that a lot of these symptoms are vague and can be attributed to other causes as well. Directly linking them to EMF exposure is challenging and unlikely. More research must continue to be conducted in the future to understand better if there’s a direct link.

The EMF frequency is very low in power lines so you shouldn’t fear that you’re being exposed in your everyday life. Also, recent research continues to support the notion that EMFs are unlikely to cause adverse health effects and that you can feel safe using your phone.

The two key aspects you should be wary about and cautious with are x-rays and sun exposure. Only receive x-rays when medically necessary and keep out of the sun if you can. You can keep yourself safe and out of harm’s way by understanding what they are and reducing your exposure overall.

You have control over how much you use your phone and how often you touch it. It’s wise to keep it away from you when not in use. You can also use the speaker function or earbuds so that you’re not always holding it right up to your ear.

Consider leaving your phone in another room while you sleep, as you’ll probably get a better night’s rest anyways. Avoid carrying your phone close to your body, such as in a pocket or your bra. It’s healthy to unplug from your devices and technology every so often anyway so you’ll be doing yourself a favour if you’re more mindful of how much you’re using it. Have it be top of mind for you but know that it’s nothing to be obsessing over. Follow the most recent research and keep an eye and ear out for any new developments.

What is the Range of Wavelength of Electromagnetic Waves?

Household appliances are at the low end of the electromagnetic spectrum and have longer wavelengths. They’re considered to pose health risks only when close to the body for extended periods.

Radio Frequency (RF) radiation is on the high end and can be found in phones, broadcast towers, and electrical security systems. The health risk is greater when the frequency is higher. Appliances such as your microwave may pose a risk, and that’s why you may have heard to not stand near it when it’s in use. Also, phone towers operate in this range and maybe bad for your health over time.

So, you may be wondering how electromagnetic waves might be dangerous. Bioelectrical signals help to regulate many processes of the human body. Science even suggests that every cell in your body might have its own EMF.

However, strong artificial EMFs can enter your body and interfere with the natural way your body works. It can affect virtually any system within your body, from your sleep cycles to your stress levels to your immunities to your DNA.

Wherever a positive or negative electrical charge is present, electric fields exist. Any electrical wire that is charged will produce an associated electric field, even when there is no current flowing. The strength of the electric field will rapidly diminish the further away it is from the charge or charged conductor. When considering electric fields from power lines outside, their frequencies are greatly reduced by objects such as walls, buildings, and trees.

In contrast to electric fields, a magnetic field is only produced once a device is switched on and current flows. The higher the current is, the greater the strength of the magnetic field.

Reducing Exposure in Your Home

Be glad to know that you do have some control over your exposure to EMF at home. While you may not want to turn your life upside down trying to be better about how much exposure you’re receiving, there are practical steps you can take to reduce it. For example, you can get rid of or limit the use of your microwave, power down your electronics at night, keep wireless devices out of the kitchen and bedroom, and not carry your phone on your body.

Use a speakerphone whenever possible and use a selfie-stick to take pictures, so you don’t even have to touch your phone if you use the camera function a lot. Instead of focusing on what exposure you may or may not have had in the past, make it a point to be better about what you can do to prevent it now and in the future. Knowledge is power and the more you understand about how EMFs work and what harm they can do the better prepared you can be to limit your exposure.

While some EMFs occur naturally, others are human-made and are a part of your everyday life. Overall, there’s a small link between EMF exposure and health problems and even cancer. Remember that the connection is considered weak and that more research will need to be done to conclude that this is a fact. So while it’s okay to be cautious it also shouldn’t stop you from going about your daily life.

It’s more vital to be aware of and keep away from high-level EMF exposure to avoid neurological and physiological problems. However, you shouldn’t worry too much because it’s very unlikely that you’d come across these types of exposures in your daily functioning. Do your best to avoid X-rays and sun exposure, and you should be okay. Awareness and education are vital to you, knowing how you can stay safe and what health risks are associated with EMFs.

It’s a learning experience and curve for everyone so be proud of yourself for taking the first step, which is educating yourself on the topic.